It is hard to miss the presence of Château de Pommard when driving through the picturesque Burgundian village. Though the main Château itself is tucked away down a smaller street away off the main road and not so obvious to the eye, the small village of Pommard is buzzing with renovation projects initiated by its newish owners, American tech guru, Michael Baum and his wife, Julie Carabello, who bought the property in 2014.

Michael’s goal from the get go was to take this historic property which dates back 300 years and to lift it to its pinnacle. He quickly introduced organic viticulture which progressed to biodynamic farming, including using 5 of their own horses for plowing, in the last few years. They will be officially certified this year in 2021.

They are an atypical domaine that seeks out experiences beyond winemaking. Focusing heavily on oenotourism, they welcome visitors to the region to their Château to partake in paid tastings and tours and a WSET school. They even created an annual music festival aptly titled “Rootstock”, featuring young, talented and emerging artists. In 2022, they are looking to open the neighbouring Château Marey-Monge as a 28-room hotel with gourmet restaurant and spa.

In addition to their estate wines, most notably those from their monopole Clos Marey-Monge, they also make a number of négociant bottlings which are produced from bought or exchanged fruit around the Côte d’Or. All wines are vinified by their head winemaker, Emmanuel Sala, who has worked at the Château since 2007.

Recently, I was invited to partake in a Zoom tasting, which kicked off the launch of their négoce bottling from 2019s.  Three wines were featured: Meursault 2019, Corton Charlemagne Grand Cru 2019 and Nuits-Saint-Georges 2019.

The highly appealing 2019 vintage was the second of three “warm” consecutive years, so many of the vintage’s wines are naturally ripe and ample. But many are also fresh and lifted with notable acidity, tender fruit cores and polished tannins that are less dense and pronounced than their 2018 equivalents. I found the three Château de Pommard wines followed similar lines to many other 2019s that I tasted in November 2020-February 2021. 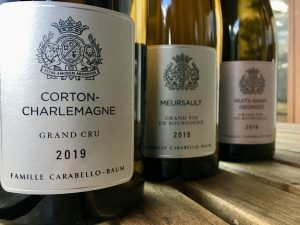 Emmanuel Sala and Michael both described this Meursault as an “old school” Meursault style. To me, that means something more voluminous with riper fruits, toast and notes of grilled hazelnuts rather than the chiselled, mineral-driven (sometimes reduced) Meursault that can be found today. True to form, their 2019 exhibits notes of brioche, preserved lemon, candied melon and toasted nuts. Mouthfilling and expansive and though moderately ripe at 14%, it still offers pronounced freshness, adding lift and length. Only 25% new oak was used though it feels slightly more pronounced than that at its youthful age. Drink now – 2028. 90 points.

A lovely Corton-Charlemagne that will tick all the boxes for fans of this appellation. Broad and powerful on the nose, but taut, mineral and focused on the palate with notes of white flowers, toasted almonds, pear, lemon curd and gunflint. A lacier style compared to their more fleshier Meursault, but it finishes longer. This will need a few more years to open properly, but the potential and beauty are there. A true Grand Cru. Drink 2024 – 2034. 93+ points.

An appealing Nuit-Saint-Georges that has both breadth and depth. Conscientious of not extracting too much in this richer vintage, Emmanuel focused more on gentle punch downs towards the end of fermentation when tannins are more easily released. Generous with red and black fruits, spice and dried flowers from 60% whole cluster fruit. Tannins are distinctly terroir-driven but nicely rounded and appealing. Quite a “juicy” wine but with layers and some complexity. Drink 2022 – 2034. 90 points.

They will soon be releasing their proprietary 2019s, including multiple terroir-focused Pommards and their flagship wine all produced from within the Clos Marey-Mange, Burgundy’s largest Clos monopole.